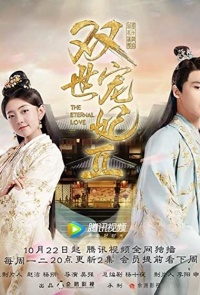 Qu Tan Er (Liang Jie) is the second daughter of the Qu family. She is in love with the king's oldest son, Mo Yi Huai (Wang Rui Chang), but she is being forced to marry, Yi Huai's younger brother, Mo Lian Cheng (Xing Zhao Lin), the eighth prince of the Dong Yue Kingdom. Unhappy with the forced marriage, Tan Er tries to commit suicide, only to wake up from her failed attempt with the spirit of another woman also taking up residence in her body. The modern Xiao Tan (also played by Liang Jie) has the opposite personality of Tan Er, cheerful and assertively strong. She is stuck in the past world and has so far been unsuccessful in her attempts to find a way back to the modern times. Whenever one of the women tells a lie, the other personality would take over the body. To complicate the situation, Lian Chen falls in love with the vivacious Xiao Tan. What will become of the unusual foursome, and will Xiao Tan be able to find her way back to her own time?

Home » C Drama » The Eternal Love
You May Also Like