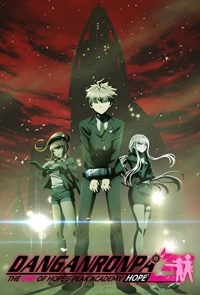 As Makoto races to stop Ryota from broadcasting his Hope video, he and the others are assisted by the arrival of the 77th Class, who Hajime managed to restore to normal using Izuru's talents. After making their way past a hypnotised task force, Hajime and the others confront Ryota, who blames himself for the entire incident. Feeling that he should not have to carry his burden alone, Hajime and the others ask Ryota to come with them as they aim to atone for their sins, convincing him to cancel the broadcast. Afterwards, Hajime and the others claim responsibility for the killing game, shifting blame from the Future Foundation, before setting off with Ryota towards a new future. Meanwhile, as Kyosuke leaves Makoto in charge of bringing hope to the world as he goes off to shoulder his own burden, it is revealed that Kyoko had managed to survive her poisoning thanks to an antidote that Seiko had made. A few months later, the former Ultimate students get together to rebuild Hope's Peak Academy, with Makoto serving as its headmaster.

Home » Anime » Danganronpa 3 - Hope Arc
You May Also Like