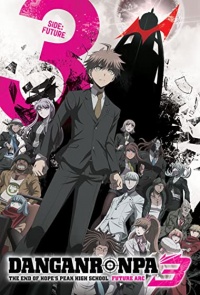 Makoto Naegi, the Ultimate Hope who defeated the Ultimate Despair, Junko Enoshima, is under suspicion of treason against the Future Foundation for harboring the Remnants of Despair who carried on her will. As top members of the Future Foundation, including Makoto's former classmates Kyoko Kirigiri, Aoi Asahina, and Yasuhiro Hagakure, are brought together to decide on Makoto's punishment, they are all imprisoned by Monokuma, the bear avatar of Junko who was thought to have been dead. Monokuma forces everyone to participate in a final killing game, in which they must try to determine a traitor amongst their ranks who will kill them in their sleep, while also trying to avoid being poisoned to death by personalised forbidden actions. Thrust into a game where no one can trust each other, Makoto's ideals of hope are pushed to their very limits.

Home » Anime » Danganronpa 3 - Future Arc
You May Also Like