Ghosts Of The Abyss 2003 Hollywood 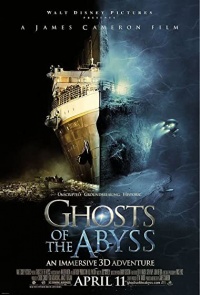 Academy Award® winning director and master storyteller James Cameron journeys back to the site of his greatest inspiration, the legendary wreck of the Titanic. With a team of the world's foremost historic and marine experts and friend, Bill Paxton, he embarks on an unscripted adventure back to the final grave where nearly 1,500 people lost their lives almost a century ago. Using state-of-the-art technology developed expressly for this expedition, Cameron and his crew are able to explore virtually all of the ship, inside and out, as never before. With the most advanced 3D photography, moviegoers will experience the ship as if they are part of the crew right inside the dive subs. In this unprecedented motion picture event, made especially for IMAX 3D Theatres and specially outfitted 35mm 3D theaters across the country, Cameron and his crew bring audiences to sights not seen since the sinking 91 years ago and explore why the landmark vessel, more than any shipwreck, continues to intrigue and fascinate the public. —Anonymous

Home » Hollywood » Ghosts Of The Abyss 2003
You May Also Like