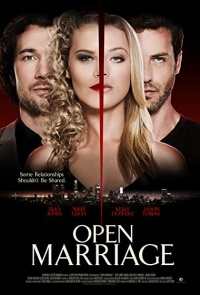 Ron and Becca are facing stresses in their marriage. Some of those stresses are financial as Ron, who owns a small construction business, had been on disability, it which ran out two months ago with he not yet returning to work, leaving Becca, a nurse, as the sole breadwinner, she needing to do double shifts to keep their heads above water. Ron also flips properties, Becca who is getting tired of not ever having a sense of having a home instead of just an investment. And they have been trying to have a baby, their attempts so far unsuccessful despite Becca taking fertility drugs. They learn from their wealthy best friends Max and Mindy - all four who have known each other since college - that they saved what was their own troubled marriage about a year ago when they decided to have an open relationship. In what is Max and Mindy's proposition to them, Ron and Becca, who admit that that the thought of sex with others has improved their own sex life although they had never actually contemplated acting on such a fantasy, agree to an open marriage with them, on Max and Mindy's caveat that they as a couple only play together, with Ron and Becca adding their own caveat solely between the two of them that they will stop if either one wants to stop, no questions asked. Ron and Becca will find that although they are enjoying their time with Max and Mindy, the open relationship does not fix existing issues in their life. As both begin to keep secrets and in the process tell lies, further suspicions start to creep into their relationship only exacerbated by the open relationship. What may be the biggest threat to their marriage is the unknown action of others, who may have their own motives working against a Ron/Becca happy ending. —Huggo