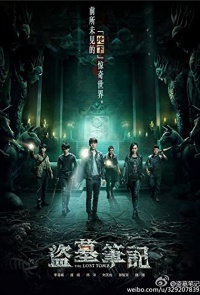 This drama is adaption of Kennedy Xu's novel series Grave Robbers' Chronicles. Wu Xie (Li Yi Feng) is an antique shop owner who comes from a family of tomb raiders. As he continues the family trade with his team of tomb raiders, he finds lost treasures of the Warring States as well as the answers to the tragedies of his family's past. With the help of his grandfather's notes and his team: the quiet Zhang Qi Ling (Yang Yang), the resourceful Pang Zi (Liu Tian Zuo), the experienced Wu Sanxing (Ken Chang), San Xing's loyal helper Pan Zi (Wei Wei), and the skillful Ah Ning (Tiffany Tang) Wu Xie sets out to find the lost treasures as well as the people responsible for the massacre of his family and search for the treasure. But what no one expected to find the intriguing mysteries that accompanied their tomb robbing adventure, and who was the owner of that tomb. —Sonja Pavkovic

Home » C Drama » The Lost Tomb
You May Also Like