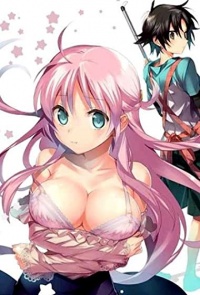 Nagumo Koushi. His house burned down on his birthday. His father has never had a job and a single dollar behind him. At the age of 12, he becomes homeless. Having wondered around the city for some time, a girl named Minerva finds him lying on the sidewalk, having absolutely no power to even move a finger. She treats him some ramen and finds out about his helpless situation. Minerva invites Koushi to be a Dorm Supervisor in a women's only college. How will his life change now? —Scientiiaa