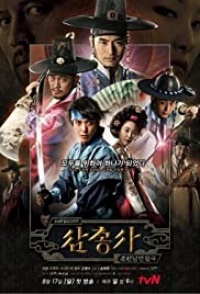 Coming from an impoverish family, Park Dal Hyan wishes to become a royal guard and hopes to be reunited with his first love, Yoon Seo, so he travels to the capital to take the military examination. However, he meets many difficulties in his travel and ends up becoming embroiled with three warriors that called themselves 'The Three Musketeers' that warn him that Yoon Seo is now married to the Crown Prince Sohyeon and harboring any intentions towards her could be seen as treason and incur on the wrath of the jealous Prince, so he better prove his loyalty to the kingdom by passing the exam with flying marks. Is not until he's about to finish the exam he realizes the Crown Prince was one of the three men he met before and they were all playing with him. This marks the start of their adventures as they try to protect Joseon from the mandates of a weak king and a Quing dynasty trying to subdue it.

Home » K Drama » Three Musketeers
You May Also Like