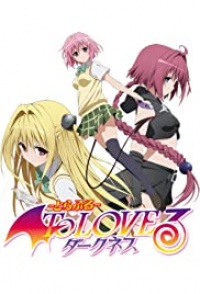 As close encounters of the twisted kind between the residents of the planet Develuke (represented primarily by the female members of the royal family) and the inhabitants of Earth (represented mainly by one very exhausted Rito Yuki) continue to escalate, the situation spirals even further out of control. When junior princesses Nana and Momo transferred into Earth School where big sister LaLa can (theoretically) keep an eye on them, things SHOULD be smooth sailing. But when Momo decides she'd like to "supplement" Rito's relationship with LaLa with a little "sisterly love," you know LaLa's not going to waste any time splitting harems. Unfortunately, it's just about that point that Yami, the Golden Darkness, enters the scene with all the subtleness of a supernova, along with an army of possessed high school students! All of which is certain to make Rito's life suck more than a black hole at the family picnic.

Home » Anime » To Love-Ru Darkness
You May Also Like