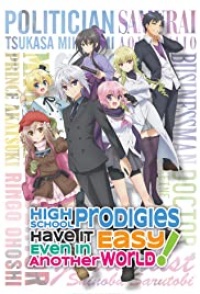 Seven high school students that got caught in an airplane accident wake up, in a middle age like fantasy different world where magic and beast-man (juujin) exist - but they do not panic at their current situation. They build a nuclear plant in a world without electricity, they control the economy of a large city in a short work's trip, and finally for their benefactor's sake who are suffering from the misgoverment, they declare war on the evil nobles. So, none of them is a normal high school student, each of them are super human high school students that stand at the top of politics, economics, science and medicine. This is a story of a dream team that possess earth's greatest wisdom and technology, that without any self-restraining bring a revolution to a different world with over-technology.