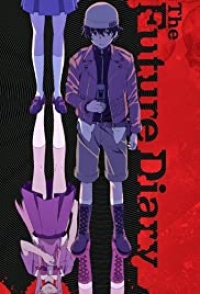 Yukiteru Amano is a 14-year old loner who spends much of his time dispassionately recording events around him in his cell phone "diary." His only friends are imaginary ones: Dues ex Machina, the "god of time and space," and Murmur, Dues's impish helper. Yukiteru's life takes a turn for the strange when his diary starts recording events before they happen and Dues announces that he's not so imaginary after all, and a turn for the sinister when his diary announces his own impending death. It turns out Yukiteru has become part of a survival game in order to determine who will succeed Dues as the god of time and space, competing with 11 others who also possess diaries that predict the future in various ways,. But Yukiteru does have at least one strong ally: Yuno Gasai, a fellow classmate who despite being a Future Diary holder herself is determined to protect Yukiteru at all costs. She's also an obsessive and possibly crazy stalker who's own Future Diary records Yukiteru's every move in ...